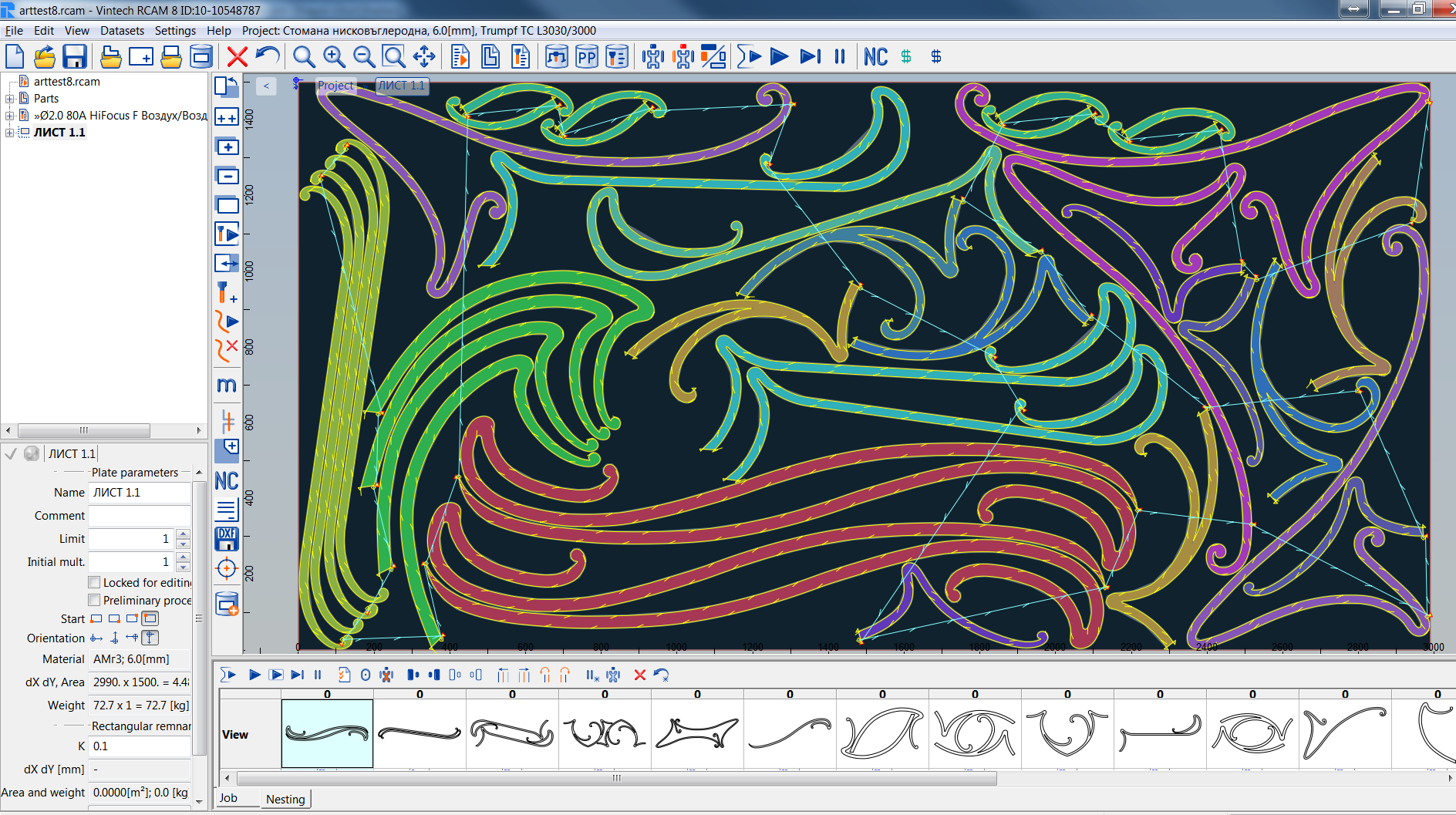 The main task in true shape nesting is placing flat objects on plate blanks. The objects can be individual parts or groups of nested parts – blocks.

The efficiency of nesting has the most significant influence on the use of metal.

The system optimises, finds the place and orientation of the object on the plate and nests it tightly to other already nested objects.

Under the management of Vintech RCAM-Manager, Vinteh RCAM-Pro performs simultaneously automatic nesting on all plates for all jobs in the order.

It is possible to choose an object located on the plate or in the nesting queue, at any time. The selected object appears under the mouse cursor and can be dragged, pushed and rotated near the desired location on the plate. After dropping, Vintech RCAM-Pro nests it tightly to the already nested objects, performing on-line control against overlaping at the same time.

The user can switch off the on-line control against overlapping and nest the object on the desired location on the plate using the mouse cursor.

Each cutting type - laser, plasma, oxy-fuel, water-jet or mechanical, has its own peculiarities and requirements.
The cutting technology is determined by the ongoing physical and chemical processes inside the cut, the type and thickness of the material and the type of the processed contour.
Vintech RCAM-Pro supports the specific tecnology knowledge as tabular rules in datasets, stored in the SQL database of the system, called Technology Knowledge Base (TKB).
The system uses TKB to determine what processing technology to implement on the nesting layouts in the project.The user can always change a technological parameter assigned by the system.

Cutting path is the path of the jet, which moves along a separate contour from a part in a manner determined by the processing technology. Vintech RCAM-Pro differs which contours are outer, inner, holes, slits, which paths are marked (or engraved), and also which points are for centring. Vintech RCAM-Pro creates paths automatically or interactively.

Route of rapid moves is the order of processing separate paths in a part and in a nesting layout.

The nesting layout accurately and completely visualises the order of processing: plates, parts, rapid moves, paths with directions, points of lighting and extinguishing, other path elements. Each type is displayed with a separate color and fill.

The nesting layout is created through combination of automatic and interactive methods for nesting and processing technology.

Vintech RCAM-Pro provides various capabilities for flexible management of the strategy for nesting layout creation.
The automatic strategies are:

NC programs are generated using open and configurable postprocessors, from nesting layouts with paths and route on the nested objects.

The NC programs can be in ISO / EIA or ESSI command systems, in their "dialects" or other command system for a specific CNC machine.
The structure and format of the NC program is determined by the capabilities of the machine, the CNC controller and the cutting equipment.

The true shape nesting imposes specific requirements to NC programs, such as: